The Vulcan project is a unique European cooperation that will change our view on the provision of fire safety and fire protection in buses, coaches and other heavier vehicles in the future. The project has shown that the objective – of raising fire safety in heavy vehicles to a new level – is not only well within reach but here today.

As fires in buses and coaches have become an increasing problem, awareness of the risks and vulnerabilities of public transport systems have increased. National and international regulations have been progressively introduced, with requirements for the introduction of fire-fighting systems in buses and similar vehicles becoming increasingly common.

Dafo Brand AB, with many years’ experience in the development of fire fighting systems for heavy vehicles, was an early supplier of systems intended to meet local rules and regulations. However, awareness of the need for further development of present-day systems has resulted in the thoughts now realized by the Vulcan project.

The Vulcan project aims to develop an overall approach to all the questions and problems that are relevant to the development of fire-fighting system concepts for buses and coaches in particular and for other vehicles in general. In order to achieve this in accordance with the project’s visions this required a broad base of knowledge and experience from different technology areas.

A project group of companies with different approaches to fulfillment of these requirements was set up within the framework of the 7 EU Program for Development and Research. The project was divided into a number of main areas, which together constituted the basis for the objective of raising fire safety in heavy vehicles to a new level. These areas were: Detection, Processed alarm management, System integration, Extinguishant containers, Nozzle technology, Testing and verification. 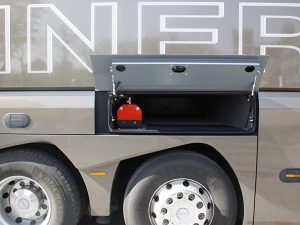 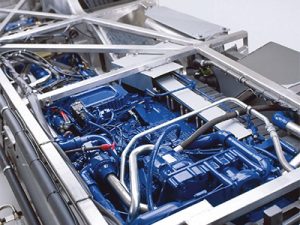 Traditionally, fire detection in engine compartments has been based on heat detection. This has been logical in the light of requirements for operational reliability in a relatively difficult environment. Trials have been performed of the various alternatives, such as smoke and IR detection, but problems of dirt and wide temperature ranges have rendered these solutions unreliable. At the same time, the need for early detection of a fire has become ever more apparent, as understanding of the importance of early attack and the resulting savings in terms of reduced downtime costs and reduced repair requirements has increased.

The Vulcan project has developed a smoke detection systems for vehicles to permit detection of the very early stages of a fire, using equipment that can withstand the conditions encountered in an engine compartment. In addition, with analogue detection, various responses can be initiated, depending on the cause and progress of the fire. Practical trials under very difficult working conditions has led to a completely new approach to the detection of fires in engine compartments.

Traditionally, there have been two types of extinguishant containers: either in the form of a pressurized container in which nitrogen under pressure expels the extinguishant into a piping system when activated,or in the form of a normally unpressurized container which, when the system is activated, is pressurized from an external source, usually a smaller gas cylinder containing nitrogen under high pressure. Increasing restrictions on the transport of hazardous goods have progressively made the carriage of pressurized containers more complicated and expensive.
This applies very much also to the pyrotechnic actuators which are used in several systems on the market today. The Vulcan project has developed a container that is unpressurised during transport and normal use, but with the necessary pressure being generated internally in the container when the system is activated.

In all development projects, verification and testing are both important and resource demanding parts of the work. This applies both to careful and controlled measurements in a defined test environment and to actual verification of performance and reliability under postulated normal operating conditions. SP, with its high expertise in combination with its long experience of fire testing, has been an important partner in many different phases of the development work being carried out by the Vulcan project. In addition, the involvement of Volvo Construction Equipment provided an unique opportunity for long-term tests under actual operating conditions, while at the same time contributing with valuable views on how developed products may best be designed for production.

In traditional fire-fighting systems in vehicles, the response has often been of a single type, meaning that the system has operated (possibly after a brief delay), or after an alarm has been received by the central control equipment. Vulcan optimizes the various possible responses, depending on the conditions applicable to the vehicle at a given time. The combination of detection of both heat and smoke, while the system can also respond to other information from the vehicle, such as different driving conditions, permits the creation of a conditional matrix to provide different responses in terms of alarms and fire suppression actions. 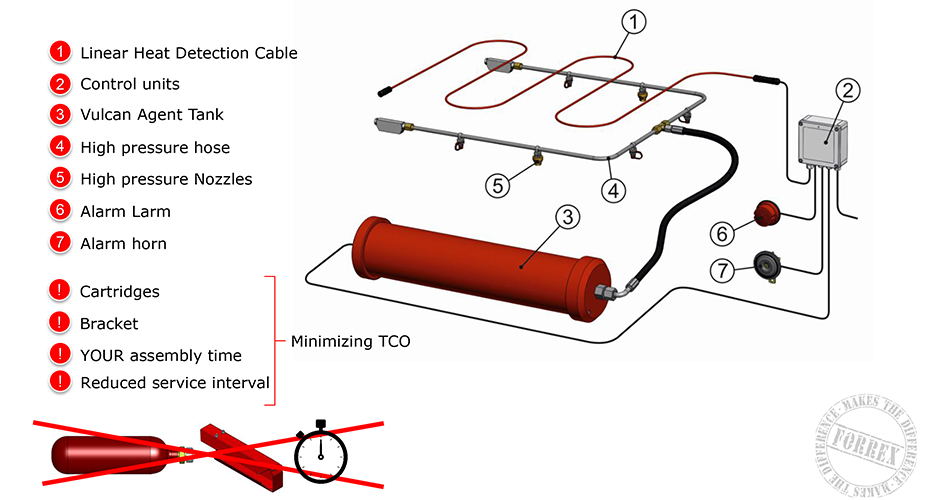 As more and more signal processing and supervision in modern vehicles is performed by various bus systems, and as information to the driver is increasingly presented via graphical interfaces, often involving the use of touch screens or similar computerized solutions, so does the pressure from the automotive industry also to include external systems in its graphical interfaces increase. This presents the system suppliers with entirely new requirements, and also conflicts at present with many of the requirements currently imposed by regulations. One of the challenges of the Vulcan project was to provide information from, and interaction with, the fire suppression system to the vehicle manufacturers via existing communication systems, without thereby compromising system safety or system integration.

Most of the present-day liquid-based fire-fighting systems work on one of two principles: spray or mist. Both technologies have their benefits and drawbacks.Spray based systems have a good ability to reach the seat of fires, even in complicated engine compartment geometries, and have high immunity to the effects of compartment ventilation. They are also effective at low pressures, which simplify the design of containers, but can also be less effective in achieving an overall temperature-reduction effect. Mist-based systems normally deliver excellent cooling effect and also have Inerting properties. However, they can be affected by the ventilation in the engine compartment, and normally require very high pressures in order to create the necessary mist, which complicates the design of the containers. One part of the work of the Vulcan project was to develop a nozzle that could deliver mists at pressures normally associated with conventional spray systems.The result is the ability to combine the benefits of both technologies in one and the same system, in order to deliver a more efficient extinguishing action.

Back Back to Solutions

AASYS was founded in 2009 as a company dedicated to detecting and suppressing fires across a number of industries. Driven by our appetite for innovation, and our patented DXS Fiber Optic Sensing approach – monitoring temperature, strain and acoustics – we have evolved dramatically, becoming industry leaders in the advanced field of condition monitoring.

Advanced Automated Systems is part of the Sekta Group.

AASYS offers a wide range of risk-management solutions. These include world-leading fire prevention, detection and suppression, and fibre-optic condition monitoring and security systems. Our world-leading sensor technology, hardware and visualisation software is geared towards one key objective – ensuring the safety and performance of our clients’ operations.

Designed by the Prime Web
Google Ads by Top Click

Scroll to top
Chat Now
1
WhatsApp Us
Hi There👋

Chat with us directly on WhatsApp for instant service.